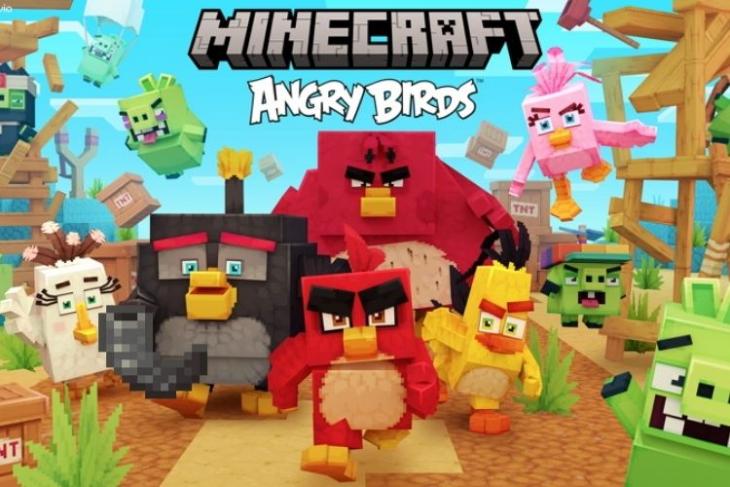 With players focused on the upcoming Minecraft 1.19 update, the community wasn’t expecting anything else in the meantime. But that doesn’t stop the team behind Minecraft from giving us something amazing. This time they bring us an unexpected but super fun crossover between Angry Birds and Minecraft. Both games have been fan favorites for years, and their fame isn’t going anywhere anytime soon. So if you already have a copy of Minecraft, you can jump in and start playing Angry Birds today. And yes, it’s nothing like anything you’ve played before.

In the Angry Birds DLC for Minecraft, the core concept of the game remains the same. The the pigs have stolen the eggs and are building structures to guide them. To counter them, you must play as one of the birds to fend off the eggs and end the wishes of the pigs. In addition to the iconic pigs, popular birds including Red, Chuck, and Bomb are also making their way into Minecraft with this DLC.

But all the elements of the game, as well as our main characters, are set in the style of Minecraft. They now have blocky shapes and pixelated textures, which takes the gameplay away from traditional slingshot titles.

Although we talk about breaking with the normal, this DLC takes this opportunity to give us a unique experience. angry birds first person experience. Instead of being a mere observer, now it’s you in the slingshot, and you have to aim pig structures right in front of you. So you may need to polish your aim even if you have sling throwing experience in your pocket.

This revamped slingshot experience is part of the classic gameplay for Angry Birds x Minecraft DLC. You can play it if you like level upgrade and casual games. However, for serious gameplay, you need to enter Mission Mode.

In the mission game mode, you have to fight against enemies using the special abilities of birds in a variety of environments and against unique pigs. Each new area comes with its own challenges, and you must rescue kidnapped members of your herd instead of saving eggs. And unlike normal Angry Birds, this mode is free slingshot. Your birds go to places manually instead of being thrown on their enemies.

The end result is a refreshing third-person freestyle game that is entertaining and fun. Plus, you can even discover some unique bird abilities and areas that have never been a part of any other Angry Birds game before.

How to Get Angry Birds DLC in Minecraft

Like other major crossovers, Minecraft’s Angry Bird mode is only limited to players in the bedrock edition. Java edition players will have to rely on the best Minecraft mods to get something similar. But don’t let it disappoint you, as this DLC offers you enough to make a temporary switch to the Bedrock edition.

Beyond the new game modes, Angry Birds for Minecraft consists of 6 new characters, 10 unique skins, and an Angry Birds Character Creator item. And the best thing is that you can get it all right away. Angry Birds x Minecraft is available on the minecraft market right now. To get it, you need to head to the market and buy the DLC. costs 1340 coinswhich are around 8 USD at the current exchange rate.

This DLC costs a bit more than most of the custom adventure maps on the Minecraft market, but are the unique game modes enough to justify it? Will you get Angry Birds x Minecraft DLC? Tell us in the comments!