What would Fortnite be like without its destructive events? The giant Cattus monster, Kevin The Cube who traverses reality, and the Queen of the Cube who corrupts the island would all be absent.

It’s evident that Doomsday events in the game are as common as the flu. They come and go on a whim and leave chaos in their wake. However, from the ashes a new beginning always arises.

This appears to be the case this time around as well, as leaks show an upcoming Doomsday event. Sadly, this has nothing to do with the Doom crossover that was teased a while back, but rather Imagined Order planning to unleash their own version of hell in Fortnite soon.

-And finally, there is a nearby landmark (unnamed POI) codenamed “DDMachine” which stands for “Doomsday Machine”. since Loot Lake is also an unnamed location, The Doomsday Device is most likely in the middle of Loot Lake and SHOULD happen with the next game update.
(3/3)

-And finally, there is a nearby landmark (unnamed POI) codenamed “DDMachine” which stands for “Doomsday Machine”. since Loot Lake is also an unnamed location, The Doomsday Device is most likely in the middle of Loot Lake and SHOULD happen with the next game update (3/3) https://t.co/2Skxt6VHeB

For those who haven’t kept up with the leaks, recently, a new milestone codenamed “DDMachine” was discovered in the archives. Without much guesswork, it’s easy to determine that the acronym stands for Doomsday Machine.

Midas built a version of this machine in Fortnite Chapter 2 Season 2. His plan was to use it to push back the Storm and break the Loop. Once freed from the Imagined Order’s influence, he could theoretically have escaped the island, but fate works in mysterious ways. 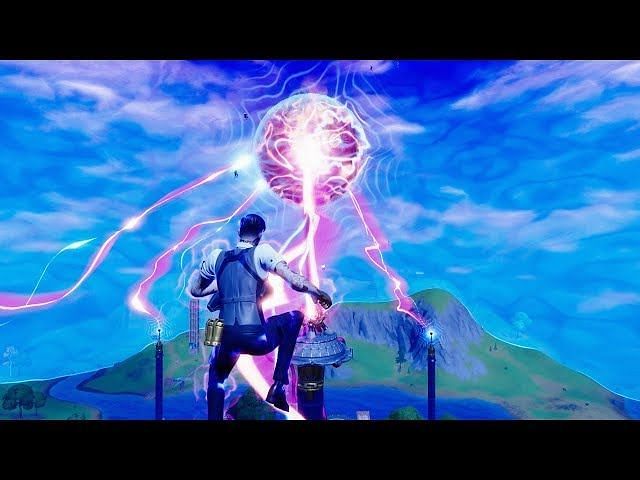 Instead of his machine breaking the Storm and Loop barrier, it ended up causing a massive tsunami that flooded and subsequently drowned the island. Given his limited resources at the time, things were going to go wrong.

However, with unlimited resources, Imagined Order is likely to make the machine work as intended. The only question is: What exactly will he do?

Although there are no concrete leaks suggesting the series of events that will take place in the live event, there are game tags that provide some information. Like the OG Doomsday device, the new one will also draw lightning that hits the waypoint.

This can be interpreted in two ways: the lighting is being used to power up the device, or the imagined Order is trying to destabilize the weather once again. Either way, things are looking bleak.

Island Forecast for Today: Extreme Weather Including Tornadoes and Thunderstorms!

Read all about the new weather coming to the island.

Island Forecast for Today: Extreme Weather Including Tornadoes and Thunderstorms! Read all about the new weather coming to the island.fn.gg/Storms https://t.co/wqiGcSZM3X

In addition to lightning, there is also something to do with heat and thermal energy. This is pretty vague at the moment and doesn’t make any sense. If one were to try to associate it with anything on the island, the most informed guess would be The Daily Bugle POI.

Since the POI is currently at the base of the volcano, that is the only connection that can be made. Alternatively, the tag may also have something to do with an upcoming heat wave in the game, which could change the landscape and the island itself.

There are also rumors suggesting that Midas will return during the live event and disrupt the process. If this is the case, what the Doomsday device is capable of may never be known.

That said, readers will have to wait for more leaks to start emerging to get a better picture. With the current season of Fortnite scheduled to end at the end of June, there is plenty of time left. Hopefully more information will be available in mid-May. Until then, one can only speculate and ponder the possibilities.