AROUND half of Britons play video games in some form, although the vast majority do so just for fun. It has become one of the most popular pastimes in the country, and some relish the opportunity to hang out with friends, blow off steam, or test their skills.

Others dream of turning this passion into a profession.

There are plenty of ways to channel your love of gaming into a career, such as game design, project management, game testing, or even working in a video retail store. The path to one of these jobs involves applying, just like any other traditional position such as those at the Commonwealth Games.

However, more recently, a new line of work has been opened for the most talented gamers: esports.

Esports are competitions that work in a similar way to any traditional sport like football, golf or tennis.

Rather than involve physical activity on a pitch, field, or court, however, esports players compete within a video game.

Some of the most popular esports include online poker, League of Legends, Call of Duty, Fortnite, Dota 2, and Rocket League.

Sometimes they take the form of a league, lasting several weeks or months, while other times they are held as a knockout tournament scheduled for a few days.

Players participating in esports events compete for a prize, which can be cash, a physical item, or something else of value.

How are Esports players different from the regular game?

Although there may be certain rules to guarantee a fair game and/or to create.

This is because developers and publishers want their esports titles to reflect games that consumers can buy as it works as a form of advertising for them.

Players can compete online or across a bank of computers or consoles in one location.

The largest esports events are held inside large stadiums where you’d expect to watch a basketball game or attend a concert.

Thus, regular video games and esports are essentially the same thing, just for the fact that the latter usually has a prize and attracts an audience. 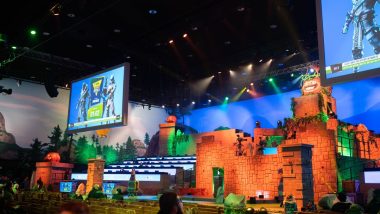 Who can participate in esports?

Some esports events are open to anyone.

For example, in online poker, most players may to enjoy online events such as Spin & Go Max, Sunday Warm-Up and Zoom.

They just need to have an account at the poker site hosting the event and meet the entry criteria.

Other esport events have a public qualifying round before the main event is closed.

This is the case of the F1 Esports Series, where, in October 2021, registrations were opened for players compete on stage where they would start in fifth place towards the end of a Grand Prix and try to gain as many places as possible.

Anyone could enter, as long as they had the F1 2021 video game and a PSN, Xbox Live or Steam account.

However, most elite esports events are invitation only.

Successful teams have grown into great companies and have attracted many of the best players in the world.

This allows them to earn places in many of the most prestigious and highest paying competitions.

How can you build a career in esports?

Getting a career in esports requires a lot of hard work, dedication, and sacrifice.

The percentage of people who succeed is similar to that of other professional sports such as football or basketball.

This is because there are so many people competing for so few positions that only the best get a position.

If you’re ready to commit, you’ll need to spend a lot of time practicing with your chosen video games.

At the same time, you’ll need to build a reputation in the esports community by joining social media groups, participating in discussions, and sharing your gameplay footage online.

It’s also a good idea to participate in open events to build your experience.

Once you feel your skills are up to the task then you could throw your hat into the ring of one of these.

Is it a viable path?

Being a professional esports player is the dream of many gamers. But just like with football, there are far fewer places than there are people wanting to fill them.

So it’s absolutely a viable path for players who are immensely talented, but it will be important to be realistic about your chances.