Epic Games is reaching its final form, landing a collaboration with one of the best anime/manga of all time in Dragon Ball. Unlike Goku, Epic Games didn’t pull any punches on this collaboration and has delivered a lot of good stuff.

We all knew Goku and Vegeta skins were coming. The real question is which characters would join them. Gohan? Swimsuit? Piccolo? Frieza?

Surprisingly, none of the above. Instead, Lord Beerus and Bulma have joined Goku and Vegeta in Battle Royale and Epic and Rare skins, respectively. Goku and Vegeta have unique built-in charge gestures that allow them to take on different forms throughout the series. Both Saiyans have access to their Base, Super Saiyan, and Super Saiyan Blue forms. Goku’s fourth form is Ultra Instinct, and Vegeta’s is Blue Evolved.

Lord Beerus is just one skin, but Bulma’s skin has casual attire and lab coat variants. 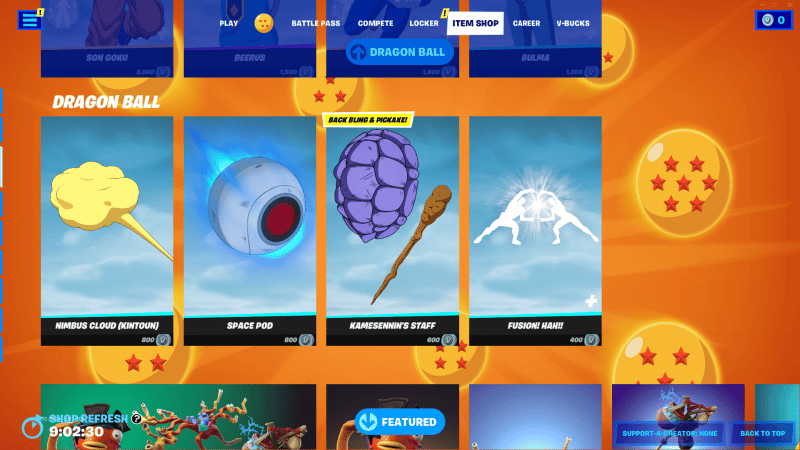 Along with those four skins comes a bunch of other cosmetics as well. We have two new gliders in Flying Nimbus and Saiyan Pod. There are also two new harvesting tools, which are Master Roshi’s staff and Goku’s power pole. Several Back Blings have also arrived, The Seer Fish, Master Roshi’s Turtle Shell, and Goku’s Power Pole (which doubles as a gathering tool and Back Bling), which has a slightly different design.

For those looking to get the most out of their investment, Epic Games has released three Dragon Ball bundles: a Goku and Beerus bundle, a Vegeta and Bulma bundle, and a Dragon Ball Gear bundle. The Goku and Beerus bundle comes with both skins, the Energy Pole Harvesting Tool and Back Bling, The Seer Fish, and a Loading Screen. The Vegeta and Bulma pack only comes with Vegeta and Bulma. The Dragon Ball Gear Pack includes Master Roshi’s staff and turtle shell, flying nimbus, Saiyan pod, and a Fusion Dance emote.

Two new items in the game

Players queuing for matches will notice two new additions in honor of this collaboration: Nimbus Cloud and Kamehameha Wave. The Nimbus Cloud is a deployable glider that you can use to make a quick escape. The Kamehameha Wave is a powerful mythic weapon that makes Thanos’ Infinity Gauntlet Beam look like a water gun. You can get both items from Dragon Ball vending machines, buy them from Bulma, or claim them through Capsule Corporation capsules on the map.

the tournament of power 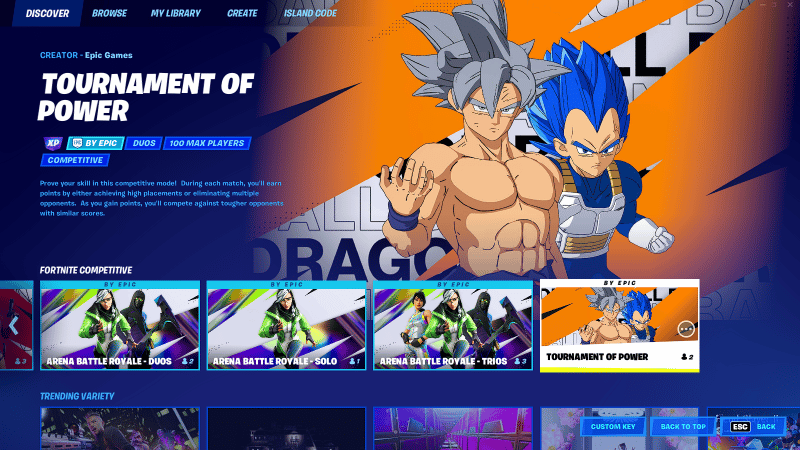 Epic Games hosted a single-day Tournament of Power on August 18.

Players competed in the event for the highest scores on the leaderboards. The first places got collaboration prizes such as sprays and emoticons. Honestly, the rewards were underwhelming at best, so if you missed the tournament, you didn’t miss much. Have you ever dreamed of riding on the back of Shenron? Well now you can turn that dream into reality. In Fortnite, anyway.

Aside from the Battle Pass, the Dragon Ball Power Unleashed Challenge is a way for all players to get some free Dragon Ball cosmetics. Includes two Ki charging emotes, a Dragon Radar Back Bling, and an Epic Shenron Glider. Players must complete Power Unleashed missions to increase their power level and get all the rewards. These tasks are thematically appropriate objectives that fit the Dragon Ball characters, such as feats of Strength or Endurance. Unlocking the Shenron Glider requires obtaining all seven Dragon Balls. Players can do this by completing at least three missions from each category. Adventure Island takes you to iconic locations throughout Dragon Ball history, such as Kame’s Palace, Room of Spirit and Time, Goku’s House, and Beerus’ Planet.

Each location on Adventure Island has things to do, some of which are requirements for the Power Unleashed quest. There are a bunch of Capsule Corp capsules scattered around that will give you a nice chunk of Battle Pass experience if you get them all. Heading to Goku’s house will have you cooking various types of fish to satiate your endless appetite. Kame’s Palace has a Nimbus Cloud run for players to acclimate to the pure of heart’s favorite ride, and Room of Spirit and Time has an obstacle course. Fly to Planet Beerus to get used to how the Kamehameha works in Fortnite. Once you’ve mastered it, you can try out the PVP Arena and take on other players. Just prepare your ears for the endless chorus of Goku yelling Kamehameha. If you want to relax and take it easy, you can travel to Dragon Ball Super Episode Festival Island and watch a couple of Dragon Ball Super episodes.

As with the Power Unleashed Challenge, there are seven Dragon Balls to obtain on Adventure Island. Players who collect them all can visit Shenron and receive a special gift.

Adventure Island will remain even after the main Dragon Ball festivities are over, so don’t feel rushed to do this. Just remember that there’s a respectable amount of Battle Pass experience here to farm if you need a little pep.

There are nine days left before the Dragon Ball collaboration ends. And while many players suspect this won’t be the last we see of Dragon Ball in Fortnite (given that Naruto had two release waves), there’s no telling how long it will be before it returns. Do all you can.