Fortnite’s biggest LAN event was the 2019 World Cup, which had a $30 million prize pool. However, there has been no LAN event since the World Cup due to the COVID-19 outbreak in the world.

Prominent creator Aussie Antics has revealed that a $15 million LAN event is in the works, featuring the biggest names from every region of the world. It will take place in Saudi Arabia, and the qualifiers have already started.

I haven’t seen many people talking about this, so I made a video.

He also talked about why some players are getting banned for being in vehicles and others aren’t.

I haven’t seen a lot of people talking about this, so I made a $15M Fortnite LAN Event video with open qualifiers for the next few days. I also talked about why some players are getting banned for being in vehicles and others aren’t. yt ❤ https://t.co/GvnMtFTdVl

Here’s what Loopers can expect from what looks set to be one of the biggest Fortnite tournaments in history.

Gamers Without Borders will host a $15 million Fortnite tournament

In a recent video, AussieAntics stated that the biggest Fortnite pros and content creators from around the world have been personally invited to participate in the GWB Elite competition.

Aspiring professionals had the opportunity to enter the tournament by participating in the three qualifiers that took place on April 24, 26 and 27. The top 100 (50 teams) qualified for the semi-finals. The top 5 teams from the semi-finals will get a chance to play in the main Gamers Without Borders tournament, which is itself a qualifier for the gaming festival in Saudi Arabia.

Explanation of the GWB event and how to go to LAN

EU/NAE/MENA/SA each region has 2 qualifiers
from each qualifier, the top 100 advance to the semi-finals
From semis to main event:
MENA : 10 DUOS ADVANCEMENT
SA : 14 DUOS ADVANCEMENT
EU/NAE: 20 DUOS FOR EACH REGION PREVIEW
read next thread
(1/3)

Explanation of the GWB event and how to go to LAN 🏆EU/NAE/MENA/SA each region has 2 qualifiers from each qualifier Top 100 advance to semi-finals from semi-finals to main event: MENA: 10 DUOS ADVANCE SA: 14 DUOS ADVANCE EU / NAE: 20 DUOS FOR EACH REGION PREVIEW Read next thread (1/3) https://t.co/UFMrGnXoea

Two such qualifiers will be organized, which means that a total of 10 teams will be able to compete in the gaming festival. From regions such as Europe and NA, 20 duos will advance to the festival. The remaining spaces will be occupied by the invited professionals.

Big names from the Middle East region, such as Mahmod “Modisk” Abbas, have qualified for the semi-finals. It won’t be a surprise if fans get to see them at the gaming fest as well.

AussieAntics has stated that the creators and professionals who accepted the invitation cannot reveal it due to an agreement. 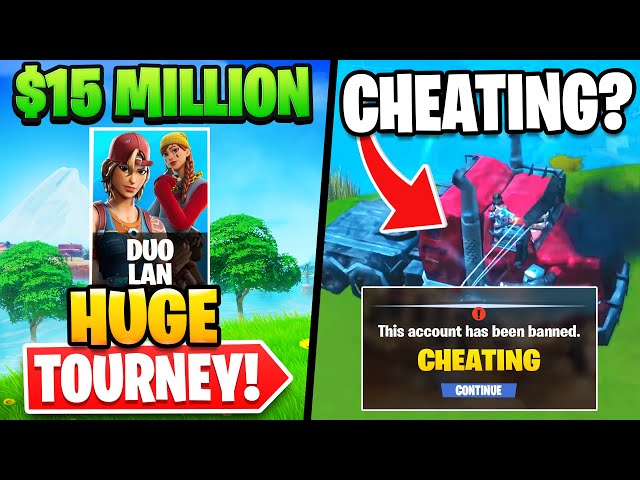 Will the next $15 million Fortnite tournament support the build?

The likes of Nick Eh 30, SypherPK, Chap and millions of their fans love these tournaments because they have a unique meta.

It turns out that the GWB game festival will be based on the Zero Build mode. This will be a huge incentive for content creators as they would otherwise have no chance against veterans in matches where building is enabled. The skill gap in Zero Build mode will not be an issue as players will have to rely primarily on aim and sense of play.

AussieAntics sources claim that the upcoming LAN event will also include build-enabled tournaments. Naturally, professionals who have honed their building and editing skills with years and years of hard work will be more inclined to play standard games.

Having a “No Build” game mode in fortnite is definitely the game to appeal to casuals, but if you think the competition shouldn’t have build, you’re an idiot and bad at the game.

Having a “No Build” game mode in fortnite is definitely the game to appeal to casuals, but if you think the competition shouldn’t have build, you’re an idiot and bad at the game.

All in all, more clarity on the gaming festival in Saudi Arabia can be expected in the coming weeks. Pros and content creators participating in the tournament are expected to reveal more information soon.